I recently had the task to automate a program, with a COM interface, and integrate it in a database application.
I already used PowerShell to automate Docker, SqlPackage and others.
So my first thought was to use PowerShell in this case too, but due to the complexity of the task i decided against it.
I ended up with a C# solution with round about 300 classes and i’m happy with it, but it brought me to the question what good criteria are to choose between PowerShell and something else.

Basically PowerShell is a nice hammer, but not every problem is a nail.
And since almost every programming language is turing complete, you can every problem in every language, but they have their pros and cons.
This is especially true for .NET-based languages like C#, F# and PowerShell, since they share the same libraries.
So you can develop a nice graphical user interface using Windows Presentation Foundation in PowerShell, even though is was originally designed for C# applications.

There are many problems out there, that you can solve in PowerShell with less code than in other languages, which makes it faster to write and easier to maintain.
But now i will show you some cases when PowerShell is a little painful and other languages are a better choice.

PowerShell is object-oriented and where object-orientation is, there is polymorphism not far. So you define interfaces and maybe several implementations for it.
But since PowerShell is a interpreted language there is no type or interface checking before runtime.
In default, everything is of type Object and you see if a method is available, when you execute the code.
You can assert types, but not have to.

There are different ways to get new objects in PowerShell.
Often they are created in Commandlets that are written in C#, like Get-Process or New-Item.
Another common option is to create a custom object using New-Object -Type PsCustomObject -Property @{ 'Foo' = 'Bar' }.
That creates a generic object that can be extended by any property or method in runtime.
Another option is to create the object in PowerShell but write the class definition in C#.
You can do that from existing .NET libraries or even in runtime.
Store the C# code in a variable and add the classes with Add-Type.
That were the options for PowerShell version 4, but in version 5 classes were introduced.

All that methods have their reason.
Let me explain that using some questions:

Commandlets are the default if you want to use existing PowerShell modules.
Hashmaps are the default if you need custom attributes in an object.
But if you want to pass data to existing Commandlets, for example to write it CSV files, then the easiest way is to use a PsCustomObject.
If you write your own functions that require parameters with specific properties and methods, then its better to define a class, that can be easily validated.
The next level of complexity is, if you write a function that has parameters that may be of the one or of the other type with the same interface.
Then you start thinking about abstract methods, reuse of code between these classes.
Here C# supports more expressions to simplify the code and compilation time validation improves the quality.

So if you start to create inherited classes in PowerShell you probably gone to far.
Maybe it’s better to create a PowerShell Module in C# or a .DLL in C# and include it in your Powershell code.

Since PowerShell supports using the System.Threading library of .NET, you can do multicore computation in PowerShell.
In some cases this is not even a bad idea.
A common case where PowerShell is used is automation and integration of other tools.
For example run a compiler, call a web service and so on. These tools may produce output that you might want to process while the tool is still working.
Sometimes you have to do that since otherwise you would get a overflow of the output buffer and you don’t get the entire output.
In that case you can define PowerShell block as variable and register it as a event handler.
But there are other cases where you have more parallel processes that need to be synchronized somehow and that may communicate in between. Then C# or F# has better expressions to manage asychronous calls. 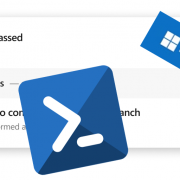 Build a Powershell Module in the Windows Linux Subsystem

Software Architecture today – what a mess!
We use cookies on our website to give you the most relevant experience by remembering your preferences and repeat visits. By clicking “Accept”, you consent to the use of ALL the cookies.
Cookie settingsACCEPT
Manage consent