Surely, you’ve heard the fairytales from microservices and monoliths. Or on a similar note, the tales about distributed (big) balls of mud from people like Simon Brown. 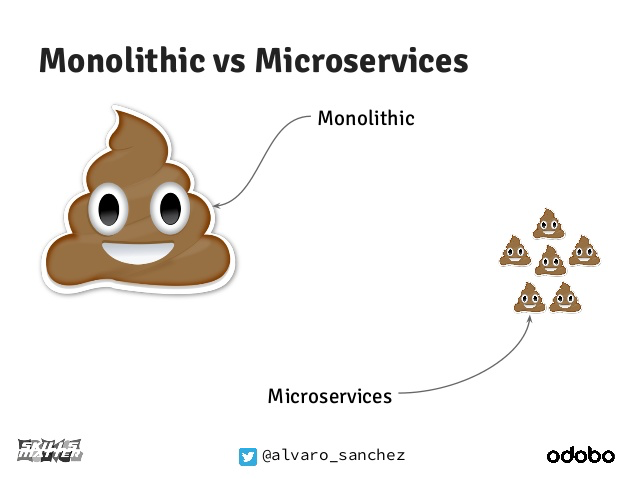 Usually these posts point out what goes wrong and how unexperienced teams go for a "hype-driven/tunnel-vision architecture". But how do you actually cut microservices? How do you design interfaces? What are techniques to find weak points in your application or system architecture?
In this post I digest the intends and views of a talk on the software architecture summit in Munich.

The spectrum of architecture definitely isn’t as binary as most blog posts suggest it is. There are way more types, here is a short recap of some of the most famous ones.

There are different definitions out there, but most of them share key points like a domain-driven modules cut, outstanding flexibility and network distribution. One (generally accepted) definition in a FAQ-style by Jimmy Bogard.

Similar to microservices, but usually bigger services and fewer in a system.

You have a valuable product, but it does not suite a SaaS business model? Most of your customers won’t offer a Kubernetes clusters or you have a hard time building a secure deployment pipeline? This does not stop good architecture! You can still cut your software in great modules and deploy it as one package.

Such a monolith has no defined structure. It consists of modules, but they are referenced across the whole system. Looks like this: 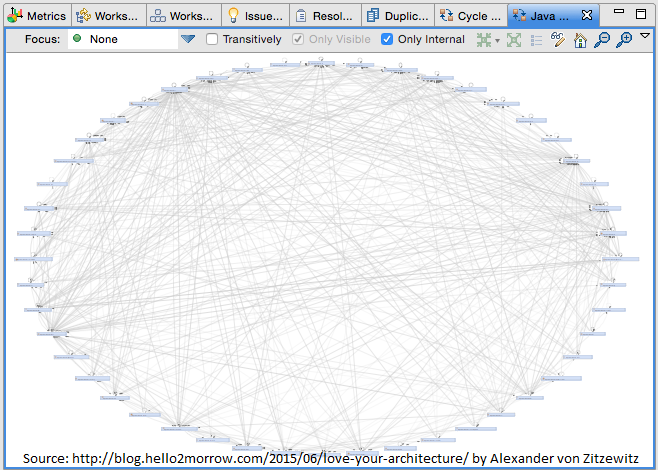 A blueprint of doing application architecture to generate standard services showing actual business processes steps. The main benefit should’ve been the orchestration of services to full processes and composition of new processes.
While SOA might have failed for most, it is "survived by its offsprings" (Anne Thomas Manes: SOA is Dead; Long Live Services). For a comparison between SOA and microservices see this O’REILLY report.

All these types focus on cutting a big software block into modules. Microservices for example focus on the smallest autonomous boundaries, SOA on reusability and composition. Because of this, the following ideas ‘how to define modules’ can be used for microservers, but don’t stop there. You can use them to define Java packages, C++ namespaces or create C# assemblies.

Often we start with question groups like "How many parts do I need?" and "Where do I cut?"

Sometimes we don’t even know if we should initially start with a monolith (Martin Fowler: MonolithFirst) or with microservices (Stefan Tilkov: Don’t start with a monolith). We can answer this particular question now: it doesn’t really matter when designing modules and interfaces. When you need a push for microservices think about upcoming complexity. The speakers phrased it nicely:

For the first questions, we follow an enhanced version of the SOLID criterias by Robert C. Martin. Herbert Dowalil calls them "5C". Such principles sound nice, but what does strong cohesion or lose coupling mean?

The key here is using "old school" metrics like cyclomatic complexity or average relative visibility. That’s it; here are the 5C:

Cut your modules in a way where they only have one concern/a single responsibility. Try to maximize cohesion inside a module.
Metrics: e.g. LCOM4, Relational-Cohersion, cyclomatic complexity

Explicitly declare every connections between modules.
Metrics: e.g. RACD and NCCD from John Lakos. Stability from the software package metrics.

Build new modules by connecting modules together. Move from a lower level of modules to a bigger view on the system. For higher level, modules follow the same patterns as for lower level ones.
Metics: e.g. automated tools like ArchUnit, Sonorgraph or Teamscale

For a deeper dive, see the "Architektur Spicker" (GER only) and follow @Herbert Dowalil on Twitter for updates on his new book.

Once you’ve cut your modules you can decide if you want to distribute them over the network. Pros can be:

While this sounds awesome (and it is!), there are also downsides:

As usual, this trade-off needs to be evaluated individually.

Modularization is hard. If you decide to go with microservices or any other way, doesn’t really matter in this context. You can distribute your modules to enforce principles, but if you cut your modules wrong, things will only get harder.
Don’t be afraid of "old school" or "university-style" metrics. Identify metrics with your team. Collaboratively search for weak points in your software (architecture). Enforce selected metrics, but never let a metric break the build and never dictate metrics top down!

What distinguishes a junior developer from a senior and the senior from a software architect? This is a commonly asked question and there are plenty of very good sources out there. One argument can be found on every blog post about this topic: a junior mostly makes small decisions and consumes knowledge. With the level of seniority, the level of decision making and knowledge sharing increases. This is why we often find people like "advocates", "fellows" or "heroes" on conferences and summits.
I went to one of these summits (Munich Software Architecture Summit) and want to share my experiences about the sessions and talks here. Let’s start with the key note of the first day. END_OF_DOCUMENT_TOKEN_TO_BE_REPLACED

Working with Azure Cosmos DB usually is a pleasure. The initial setup process is fast and easy, working with documents very intuitive and once you go to production you don’t encounter any scaling barriers. It might not be the cheapest database out there, but you get what you pay for. END_OF_DOCUMENT_TOKEN_TO_BE_REPLACED

Since Powershell Core supports Linux, you might want to test your Powershell Module if it works on Linux as it works on Windows. You could setup a virtual machine, which is a litte time consuming and cumbersome. You could use a continous integration service like AppVeyor which does not allow to debug if the test fails.
Another option would be Docker. But anyway i tested the Windows Linux Subsystem (WLS) and it’s pretty good! END_OF_DOCUMENT_TOKEN_TO_BE_REPLACED